We are a Black-owned transportation and Black tour provider in Boston.

A night at the theater for two with dinner and parking will run you about $300. Knowing this, we wanted to offer something else – more experience and exploration stuff – like tours and sightseeing trips to 100 African American heritage sites, institutions, outdoor events, museums.

We’re showing how much diversity in tourism there is — we highlight more than the travel sections of the distinguished Boston Magazine and the Boston Globe Travel magazine. Each year, we would see their list of fantastic places in New England to visit but Black, African American locations were mission from those list. Our focus is all inclusive.

We can do trips to colonial Boston sightseeing destinations encompassing Black culture. Our Black Boston tours are African American oriented. We will talk about tghe legacies of the Early Africans who came here against their will. If you were in the early Boston colony in the 1600s and you were a Black person, then more than likely you were owned by a Puritan male and his family.

Lincolnshire Boston England has a church that looks just like Trinity Church of Copley Square. The Puritan left this Boston in Lincolnshire for the New World. Their ship blew into the Cape Islands around 1620. Eighteen years later, a small group of enslaved, documented Black Africans set foot in Boston. They were sold. Receipts recorded the year 1638. Boston’s history of settlement is about 500 years long. Today, there are 14 sites and homes that were built and owned by Blacks on Beacon Hill in the 17th century. They are private homes today but you can tour their streets and see the designs and architecture. The Black Boston community of Beacon Hill left a legacy of work in freedom fighting and political. The Museum of African American History is on the hill and can serve as a starting point for the Black Heritage Trail – the most familiar one in Boston, but not the only one.

To assist us in our tour design and development work, BostonMurrell became a member of the The National Association for Interpretation (NAI)  and completed the CIG certification course February 2021. The NAI is a 501(c)(3) not-for-profit professional organization dedicated to advancing the profession of heritage interpretation, currently serving about 7,000 members in the United States, Canada, and over thirty other nations. Individual members include those who work at parks, museums, nature centers, zoos, botanical gardens, aquariums, historical and cultural sites, commercial tour companies, and theme parks. Commercial and institutional members include those who provide services to the heritage interpretation industry.

There are many challenges ahead because we are working out tour routes and packages to destinations that have never, ever been presented as tours. With the NAI education and your support and interests, we are building a catalog of unique Black Heritage tour products. It has been our dream since inception to present the new Black New England Heritage Tour Series catalog,

The Royall House Slave Quarters visitation schedule has been impacted by construction. Call before you visit. The Royall historic house museum is one of the only known remaining freestanding slave quarters in New England.

#nationaltrust The black Jamaican MORSE family, wealthier and far more influential than their white ROYALL relatives whose bequest helped found the Harvard Law School. Kin to the BROWNS of RI and the PEABODYS of MA here in the US. https://t.co/1ikenPaC2w pic.twitter.com/SS7F8rw4C0

You have come to the right place for Black Heritage Trail tour coverage of Black New England.

New England is in the northeastern region of the United States. There are 14 million people alive in the area. The region is 72,000 square miles and includes the states of Maine, Vermont, New Hampshire, Massachusetts, Connecticut and Rhode Island.

Boston, Massachusetts is the hub of New England. It is the largest city in the region. Established in 1630, Boston pre-dates the American Revolution (1765-1783). Boston first Black community was established in 1638. 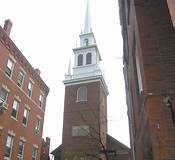 Cranking up the culture on Martha’s Vineyard. The African American...

Rather than commute to work, stay in the city at hotels...

Boston Marathon guests can head over to nps.gov/boaf for a free...